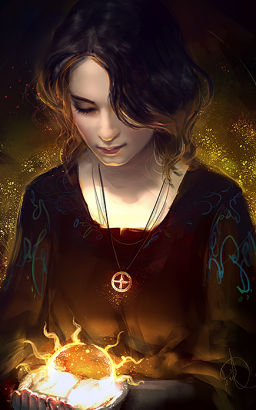 Della is a quiet, solemn-looking girl. She looks surely too young to have given her vows of service to a god, yet give them she has. When the weight of her gaze falls on you, you feel as if she is truly listening, and weighing each and every word you say.

An abandoned babe raised by the church, Della has spent her life entirely steeped in the worship of Illmater. She takes her faith very seriously, and feels called to go out into the world so as to better take on the suffering of others.

In addition to her vows of service, she has given two other vows: that of pacifism, the refusal to take another sentient life; and a vow of silence, that no word shall pass her lips. While well-versed in sign language, she is well stocked with both parchment and a slate and chalks, for those who are not.

She does not cast her spells in silence, as some are able, but instead a most beautifully ethereal wordless song issues from her lips.

Notes:
- Della is mute in accordance with her vow, but is not unable to communicate. She will sign (using the language system of the server; you will need to have learned sign as well to understand her) or write (usually with her chalk and slate, hung about her neck to be kept in easy reach). She is also not deaf; you can communicate freely with her.
- Della goes unarmed. She sometimes uses a staff as a walking stick, but more commonly holds only a lantern or her holy symbol of Illmater. She is also unarmoured, to accept the suffering the world would give her.
- Della's pacifism is a personal vow that she enforces on no-one else, a promise to only take suffering out of the world, not the reverse. She explicitly feels called to give her aid to those who walk in the darkest places, hence traveling with any party who needs her.
- Della will not kill, but she is not helpless. She affords conflict and has absolutely no damaging spells, but when forced she does have several disabling or protective ones, and when accosted by sentient foes she cannot avoid, she will knock them out and tie them up rather than killing. The fact that she fights unarmed allows her to choose to do non-lethal damage in this fashion, even if the server is not set up to mechanically recognise this. I even specifically keep a coil of rope in her inventory for the purpose.
- When not out with a party, Della works with the local Sarshel church to provide free healing to all. She stands outside Felik's Functionals, just inside the docks area.