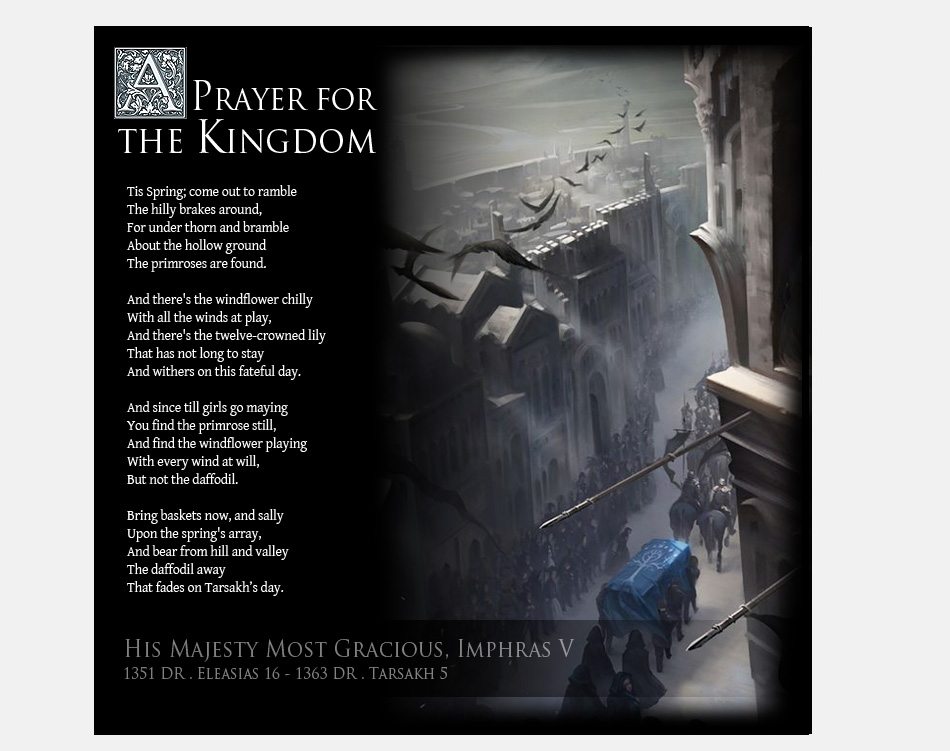 Credits: Poem adapted from A.E. Housman's "The Lent Lily". Artwork by Rin丘丘.
“Violence is the mark of the amateur.” ― Garrett, Thief: The Dark Project

Perry Quickfoot, drapes his windows in black cloth and dons an armband of black in mourning for the death of a king of his adopted country.

Anton did not know how to pray to the Triad or how to make his words reach their ears in the church but aware that the death of a lion meant the coming of vultures, he joined hands together over the altar to pour onto it the dark cloud of dread he felt looming over Sarshel and the willpower he needed in order to share that emotion. His voice emphasized the ephemeral yet warm manifestation of his soul over the altar, whispering to the stern statues that stood before him in the ethereal tongue of Celestia. "Saz zuo woitel yrl cayiuc'l qeluqhel ic yrel lyuns yray fihh vusel, act wijel yrels yrel helatlnl yray yrelz celelt"

Spoiler:
"May you guide this nation's people in the storm that will come, and give them the leaders that they need."

When the mourning bells toll... 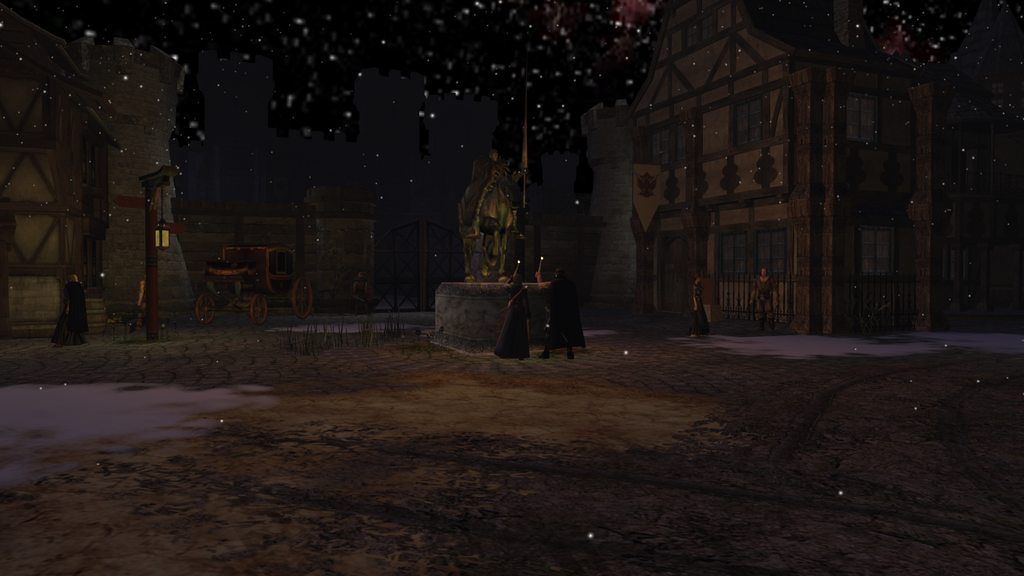 As night settles in and the mourning bells toll, Sister Kelda Adler hears of the recent death just after returning to town. Solemnly she gathers in the snowy Square with her husband, Paladin Jerek of Ilmater, to hold a small vigil for any who might wish to take part. 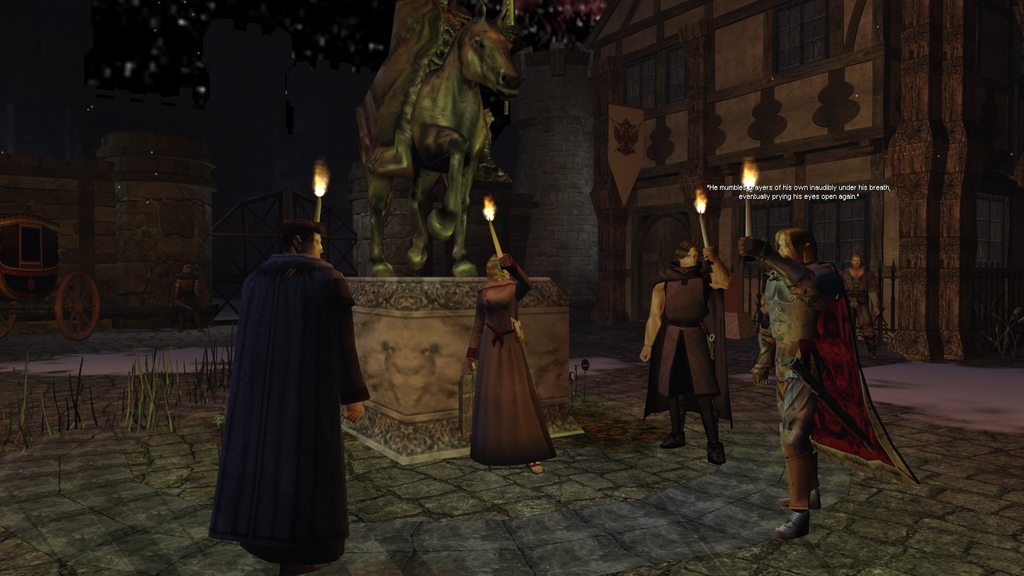 "Let us bow our heads and pray," says the Ilmateri priestess as people begin to gather. "Let us pray that the young king finds mercy and peace in the afterlife. May his family find comfort in their suffering. May the Martyr embrace him ever gently."

"...Wull' fihh pel tucel," echoes Kelda. She pauses, and studies the small crowd. "Are there any who wish to speak?"

A few do. Her husband is the first to. Thomas Paige of Songhall speaks up, afterwards.

"I, um," he hesitates before speaking. "I hope he gets to enjoy himself where he's gone. Like he couldn't while he was bedridden here," says the young man.

His words have an effect on the usually stoic priestess. Though she already appears solemn and a bit saddened by the news of a long suffering child's death, Thomas' words leave her looking a bit stricken. She composes herself after a sympathetic, knowing look from her husband that gives her a little more strength to continue.

Kelda bows her head at his words, and then she looks to the others.

Merney, the adventurer, surprises her by speaking up. He seems kindly and honest when he does, and Kelda's expression shows a little more respect for the man as a result. "Lost one of my siblings when I was young, and it always stings relentlessly for someone, king or not. Fathers and mothers lose a son, and others a brother. Some a friend. I'm not local, and I don't have any interest in Impiltur's lineage, but a loss is a loss, and a child's a grave one. I hope this one rests better than he did here."

Kelda bows her head at these words, too.

Thomas Paige speaks up again. "May the kingdom endure this as well. Three bless him, and the rest of us."

Kelda's smile is strained. "Thank you for your words, Thomas," she says echoing his words before adding her own. May the kingdom endure this as well. Three bless him, and the rest of us. Ilmater relan uon qnazelnl."

When everyone has spoken their piece, she turns and sets her candle into a holder atop the statue. She invites the others to do the same, and they join her in a moment of solemnity. Finally, they turn away and leave the candles in peace. 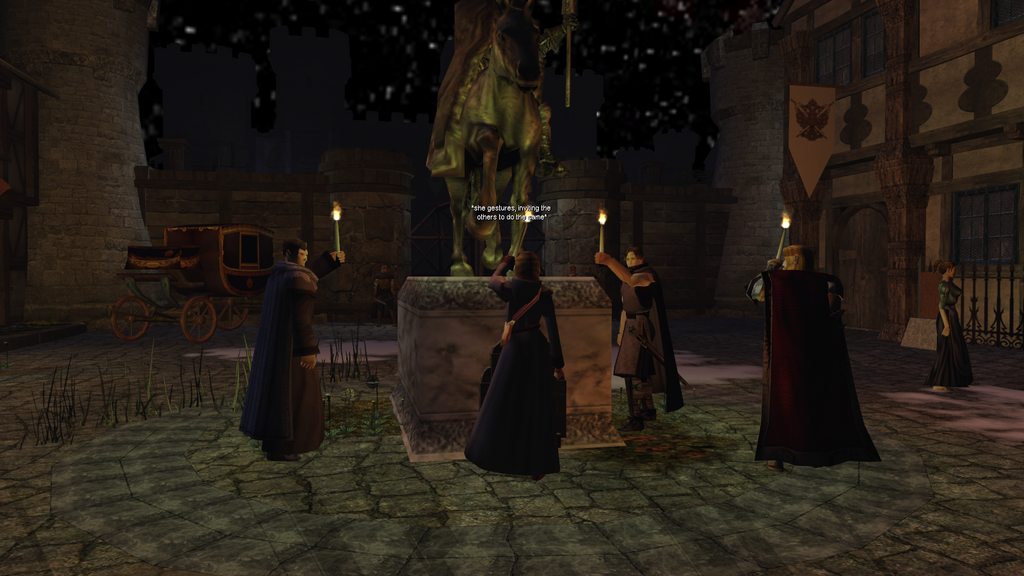 In the darkest fathoms of the Sailor's Star attic, at the dead of that bitingly cold Tarsakh night, the ancient Dwarf known as Hróin stands over a back pewter bowl filled with water, his arms crossed on his skeletal, curbed chest. Looking at it for a long moment in grim silence, he finally drops a small, plain lump of a clay-like substance in it. Frothing for a mere moment, the water swirls lazily, turning from a rich red colour, to an earthly brown and finally settles to a dark grey hue, almost indistinct from its container in the darkness over the course of the next few minutes.

Tristan Thalavar returns upon the morrow to Sarshel. Having grown bored of the city, he had decided to retire from it and take lodging in Outentown, but of course that was merely tedium dressed in a different colour. His hood is drawn, concealing his face as he takes the road towards Sarshel. Strange. He thought he would be the only one to make the journey at this hour, for it was late in the morning, and the working day had begun. Yet, Tristan joins a sea of black shawls that walk to the city. He does not ask them of their business: it is none of his, nor would his be theirs.

It would be impossible, however, to go long in Impiltur without hearing of the news. Imphras V has died. Tristan sees candles dedicated upon Sarshel Elethlim's statue when he arrives at the gates.

It is a question he asks emphatically, though that is hardly his social style. It was not in his interest to compose a finer question, for Margaux knew his thoughts well-enough already. He knew that the news would come as a blow to Margaux, who he now spied prowling atop the wall of the palace courtyard.

They will take you for a bad omen, Margaux.

Do not say so, Margaux: say not so.

When else, if not now?

Tristan looked to the feline, and she looked back. Margaux would not forsake proximity to the palace at a time like this, but she was no spy. Whatever she heard, it was not heard in the interest of feeding information to her Sorcerer master. Felines have a great affinity for affairs of the nobility, and her concern with it was separate from her relationship with her master. Tristan would not disturb her.

The young noble keeps his hood up, though for the first time nobody is looking his way. The people are setting their candles; offering their prayers; and comforting their loved ones. Tristan cuts across the square, seeking refuge at The Sailor's Star. He settles down there, and broods over the news of Imphras V's death. What would they say of it in Westgate? Disease emerging in the highest echelons of society, claiming the lives of the nation's greatest. Impiltur's people were not so trusting in The Triad that they would not perceive the signs, were they? Doom had found a prospect in the kingdom; Fear was receiving its dowry even now. The Prince of Lies was laughing.

Tristan Thalavar decides to remain distant from the affairs of the people: hadn't he always? It was a time for discretion. Presently, his only interest was acquiring a copy of any text that speculated upon the Westgate-born theories of degeneration. Tristan considered grimly how fine a case study Impiltur would become for the scientists now.
Aryen Caladras
Tristan Thalavar
Nathaniel Askovar
Elizabeth van der Lowe

Jerek's words are simple during the vigil.

"It is always a tragedy when a child dies. But we do what we can to make the world as just, fair, and good as we are able.

Despite all the efforts of the healers to cure him, our King died. We will sometimes fail, but we need to accept that along with our successes. And do what we can during these dark times for the kingdom."

A long day of fighting has lent the sound of exhaustion to his voice, but there is also the determination of one who knows they have a great distance yet to go.

On Wynna's part, she does not see fit to insult the natives of Impiltur by making a show out of pretending to share in their great mourning; though still a citizen of Sarshel, she is still a foreigner through and through, and it shows in her custom and mannerisms freely. Instead, in order to properly respect the events going on about her, she reverts to a dour and subdued mood, one that seems to come easily to the historian as she writes feverishly in her notebook and upon scraps of paper as she looks upon the crowds of mourners and passers-by. It seems she's intent to pay her respects not by tears, but by seeing that these events are documented concisely and accurately.

Fenneken keeps to herself and decides to exchange her stay in Sarshel for one in Outentown. The reason behind it is not shared and she dressed herself in a robe that is as black as her hair. Both make a sharp contrast with her pale skin.
Mains
Fenneken : Obscure arcanist
Leopold Thunersdai : Damaran Tempurian
Aleks : Rashemi barbie

Users browsing this forum: No registered users and 3 guests